A Fangsmith is the term for someone who has studied and specializes in the art of making fangs for people. Only after an extensive apprenticeship and numerous hours of hands on experience will one be deemed by Sabretooth as qualified to be a Fangsmith

Evan Christopher can make any kind of fangs that you desire. Tell him what you want and he will design the fangs of your dreams. Some of the most popular fang styles include:
Click here to read the The Tampa Bay Times article where they recommend Evan Christopher for people in the Tampa Bay Area in search of a fangsmith: 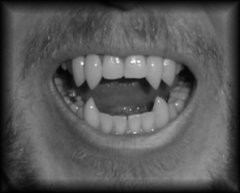